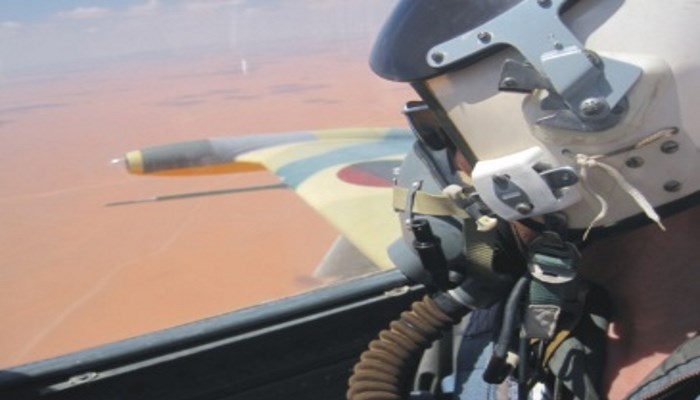 This research aims to presenting guidelines for establishing a conception for strategy of building an aerial reconnaissance system in Libya for the purpose of securing of the boarders, coasts and vital establishments taking into consideration the special case of Libya in terms of its

This article also gives a comprehensive idea on types of modern tools of aerial reconnaissance (ex. airplanes, embedded aerial monitoring systems by using a simulation model of aerial control on a certain border area by applying the theory of multi -criteria decision analysis through which different intervened elements are analyzed to fulfill the requirements and standards and securing the most efficient selection of planes and equipment on practical and scientific bases. Reconnaissance strategy in Libya It became highly urgent to give an extreme priority for aerial reconnaissance in Libya particularly under the current circumstances taking into consideration the special nature geographically, geopolitically and weather wise which forms big challenges for the control process of the land borders and the coasts, and for the purpose of putting an effective and comprehensive strategy for aerial reconnaissance in Libya. Special nature of Libyan geography One of the biggest challenges which face the idea of building a complete aerial reconnaissance system is the vast geographic area which totals 1,759,540 sq. km , ranked sixteenth in the world characterized mostly by a dry desert land. Climate Libyan climate is generally desert like with high temperatures in the summer and low visibility due to sand storms which prevents planes from flying at certain conditions. Terrain Libya land has a variety of surfaces starting from sandy and semi-sandy deserts, in addition to rocky and mountainous regions, and even though some these surfaces considered as a barrier for external threat, its importance nevertheless continues its downfall with the development of telecommunications and means of transportations. Geopolitics status The more neighboring countries shared with borders , the more difficult becomes the task of securing these borders and even more complicated by geographical and political factors of those countries as their political and economical stability is reflected in the neighboring countries . The Libyan coast extends for about 1900 km and its economical waters stretches to 62 nautical miles. The land borders is 4348 km long shared with 6 countries consecutively: Chad 1055km, Algiers 982km, Tunisia 459 km, Sudan 354 km and Niger 353 km as most of these borders are of deserted sahara. Types of reconnaissance airplanes A) Reconnaissance airplanes B) UAV Embedded aerial equipment The reconnaissance airplanes carry a set of reconnaissance and communication equipment. This paper focuses on three of these types: a)Gyro stabilized thermal cameras b)SAR synthetic aperture radar C)Data link Reconnaissance scenario model Objectives have been set to achieve an efficient reconnaissance system. One area was selected as a model for this study to consider the reconnaissance requirements as follows: -Targeted area is the axis of Ghat- Alwigh - Elsara - Kufra Description: a desert borderline in the south of Libya which stretches to 1600 km, an unpopulated area with different surfaces of mountains, sand hills and rocky land. Requirements: Possibility of flying in a reconnaissance position for a distance of 800+200 km range of transition. Flying over the target for 30 minutes Ability to fly for minimum of 5 hours. The area to be covered by monitoring system is 20 square km Evaluation: having established the scenario requirement, an evaluation on the available monitoring systems will be done to assess its capacity of fulfilling those requirements based on several elements of evaluation: range - endurance-speed-area patrolled in one hour. Three different patrol airplanes have been selected out of which the most suitable will be chosen; the first (F-406), the other (EMB-145)and the third is UAV (sky-y). And since there are many interrelated factors in the evaluation process, and in order to come out with most practical results, the theory of Multi-Criteria Decision Making (MCDM) will be used by listing the proposed airplanes in a table and define a certain weigh of each of these factors based on importance (table 1): This MCDM model is applicable through the following steps: -Distance is defined as about 1600 km. -An assumption was put that airborne systems cover an erea of 20 square km (5 km radius circle. -Reaction time is estimated to be one hour only which is the time during which the airplane can reach the target inspection point. -Number of airplanes needed to secure the area completely will be calculated on reaction time and airplane speed distance\border\speed. -Total cost of the airplanes shall be calculated by multiplying the cost of one plane by the number of airplanes. -Area covered in one hour will be calculated. - The weight of each element impacting the decision-making is given attention and the system is ranked according to the element. -Data is inserted in the analysis table to find out the most suitable proposed scenariotable 2. Table 2: data analysis table Analyzing the evaluation outcome: It is clear from the above assumptive scenario and evaluation of the actual weight of each important element of each system in terms of its suitability and ability to perform the assigned tasks, that (Reims F-406) gained points. Thus it is considered the most fit for execution of reconnaissance in accordance with the proposed scenario and assumptions set forth, as five of this type of airplanes will be required to secure patrol over the set area in addition to its relatively low cost of 20 million Euros and with an average speed. Conclusion: 1.Control over land is only achievable through the air control by establishing an efficient air reconnaissance network capable of securing the wide area and long and vast desert and sea borders of Libya. 2.Air reconnaissance depends on airborne systems with long range communication systems to be carefully selected independent from the international market and then integrate it in one complete system. 3.A map of Libya shall be developed to