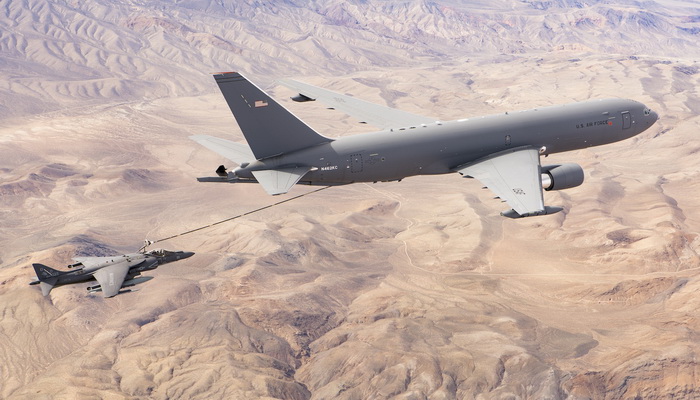 The first Boeing KC-46A Pegasus tanker that will be delivered to the U.S. Air Force next year successfully completed its first flight and airborne tests on December 5, 2017, taking off from Paine Field at 10:32 a.m. PST and landing approximately three-and-one-half hours later

During the flight, Boeing test pilots took the tanker to a maximum altitude of 39,000 feet/11,887 meters and performed operational checks on engines, flight controls and environmental systems as part of the Federal Aviation Administration (FAA)-approved flight profile. Prior to subsequent flights, the team will conduct a post-flight inspection and calibrate instrumentation.

«We’re very proud of this aircraft and the state-of-the-art capabilities it will bring to the Air Force», said Mike Gibbons, Boeing KC-46A tanker vice president and program manager. «We still have some tough work ahead of us, including completing our FAA certification activities, but the team is committed to ensure that upon delivery, this tanker will be everything our customer expects and more».

The newest tanker is the KC-46 program’s seventh aircraft to fly to date. The previous six are being used for testing and certification and to date have completed 2,200 flight hours and more than 1,600 «contacts» during refueling flights with F-16 Fighting Falcon, F/A-18 Super Hornet, AV-8B Harrier II, C-17 Globemaster III, A-10 Thunderbolt II, KC-10 Extender and KC-46A Pegasus aircraft.

The KC-46A Pegasus, derived from Boeing’s commercial 767 airframe, is built in the company’s Everett facility. Boeing is currently on contract for the first 34 of an expected 179 tankers for the U.S. Air Force.

The KC-46A Pegasus is a multirole tanker that can refuel all allied and coalition military aircraft compatible with international aerial refueling procedures and can carry passengers, cargo and patients.

We have 1604 guests and one member online